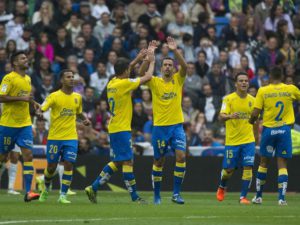 After the international break, La Liga resumes with a full fixture list this weekend and it is an unfamiliar name which sits on top of La Liga (albeit on goal difference).

Granted, it is still very early days but could Las Palmas be about to do a Leicester city and fly under the radar to glory? In the betting stakes, these Spanish minnows are unfancied, with this review of Bovada.lv putting them at 1000/1 for Primera Division glory this season.

Victory this weekend away at Sevilla will leave many believing that Las Palmas could well have the squad to compete for Europe (let’s be realistic the league title is surely out of the question) and that must surely be the goal for a team who finished a respectable 11th place in last season’s La Liga after promotion from the Spanish second division.

Last season was Las Palmas joint highest top flight league position since they finished 6th way back during the 78/79 campaign.

In their 68-year history, Las Palmas only silverware to date is two Segunda titles (in 1984/85 and 1999/00). With no La Liga titles, European crowns or Copa Del Rey trophies to shout about (despite finishing runners up in 1978), the Los Amarillos (The Yellows) will be looking at pushing for a European spot or potentially a serious Copa Del Rey Challenge.

Can they beat Sevilla?

After the start they have made undoubtedly. With 9 goals scored already this campaign confidence is high, especially as the goals have come from a wide variety of players, Livaja (2), El Zhar (2), Boateng (2), Araújo (1), Viera (1) and Momo (1) leaving head coach Quique Setién which plenty of attacking options.

However, Sevilla will prove to be their toughest opponents yet. Defeating Valencia was impressive for Las Palmas although the ‘Valencianistes’ are still in the process of recovering from a disappointing season last time out. Turning over Granada was no easy feat, but now they face a genuine Champions League contenders in Sevilla.

Sevilla themselves are undefeated in their opening two games. A ten goal thriller against Espanyol on the opening weekend gave the fans a rollercoaster of a ride as they eventually came away with a 6-4 victory. A rather tame 0-0 at Villarreal followed left the club satisfied heading into the International break.

Victory for Las Palmas will be a huge result for the club and force La Liga to take note. The title will be a step to far but it may be no surprise seeing Las Palmas travelling Europe next season.