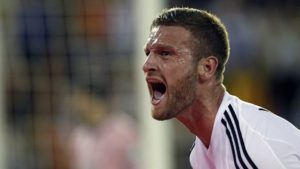 Arsenal are close to completing a deal to sign Valencia defender Shkodran Mustafi, but a fee for the centre-back is yet to be agreed by the two clubs.

The Premier League outfit are keen to sign Mustafi as soon as possible as they lack defenders due to injuries suffered by Gabriel and Per Mertesacker in the build-up to the new campaign.

But Valencia are determined to fight for the best possible fee for the Germany international, who featured for his side at Euro 2016 this summer.

Mustafi has experience of the Premier League as he was previously on the books of Everton, but he left Merseyside without making any appearances for the club.

The player’s agent has told SPOX Mustafi has agreed to join Arsenal, but Mustafi’s father, who also acts as an advisor to the 24-year-old, has denied that a deal is close.

A fee in the region of £30 million is expected to be paid to Valencia by Arsenal should Mustafi sign for the Gunners.