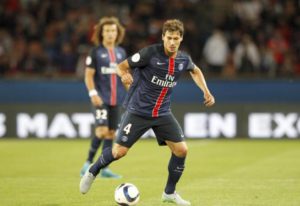 La Liga club Real Betis are reportedly in talks with Paris Saint-Germain over a deal for their former Spurs midfielder Benjamin Stambouli.

Stambouli struggled to make an impact in Ligue 1 last season and the arrival of new coach Unai Emery, who has signed Grzegorz Krychowiak from his old club Sevilla, has seen Stambouli slide down the pecking order.

However, Stambouli was a surprise selection for PSG’s 4-1 Trophee des Champions victory against Lyon at the weekend, excelling alongside Thiago Motta at the base of the midfield.

According to a report by L’Equipe, negotiations are ongoing between Real Betis and PSG, but a sticking point is the fee required by the French club for the midfielder.

PSG are hoping to receive around 9 million euros for the 25-year-old, while Real Betis only want to pay 7 million euros.

With Blaise Matuidi, Adrien Rabiot and Marco Verratti all expected to be preferred by Emery in midfield, Stambouli may be allowed to leave before the end of the transfer window.