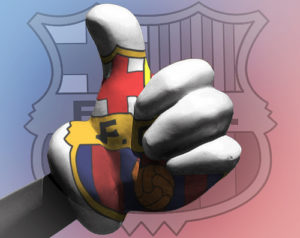 Barcelona had managed to enthrall many with their fantastic display of attacking football throughout the campaign but the usually artistic Catalans proved that they have more than enough grit in their locker as well with their brave performance in the Spanish Copa Del Rey victory over Sevilla on Sunday.

Such is the high level of standards at Barcelona that ‘merely’ winning the title would have been seen as a failure of a season and as a result, Luis Enrique and his men were under pressure to deliver another trophy in the form of the Copa del Rey in order to avoid criticism from the blood thirsty media.

However, doing so was never going to be easy as Barcelona were up against serial Europa League winners Sevilla and fresh off the European triumph over Liverpool, Unai Emery’s men were hungry to lift another trophy as well.

As expected, the match started off with Barcelona dictating the play and the likes of Luis Suarez, Lionel Messi and even Dani Alves all came close to opening the score line during the first half-an-hour of the game.

To be fair to Sevilla though, they looked very dangerous on the counter and it was from a sudden attack through from the Andalusians which the complexion of the game was turned on its head.

On the 36th minute, Kevin Gameiro, whose French national side are 7/2 favourites to win the Euros according to the Euro 2016 odds from Paddy Power, found himself through on goal and Barca defender Javier Mascherano decided to haul the Frenchman down, earning himself a red card.

The sending off certainly rattled Barcelona and conversely, Sevilla sensed a great opportunity to put their more illustrious opponents under pressure. Immediately after the sending off, Marc-Andre ter Stegen was forced into a smart save from the resulting free kick taken by Ever Banega.

As the two teams head into half time, Sevilla knew they had the upper hand while Barcelona boss Luis Enrique sensibly chose to take the side of caution, bringing in Jeremy Mathieu for Ivan Rakitic for the second period.

Sevilla continued on the front foot during the second half as well and Banega was once again denied on the 49th minute, this time by ter Stegen’s right hand post. Just when it looked like things could not get any worse for Barcelona, Suarez had to be forced off on the 55th minute after overstretching himself and the Blaugrana faithful were surely left fearing the worst at the time.

Sevilla continue to press for the opener but Barcelona remained defiant and heroic defending from the likes of Gerard Pique, Sergio Busquets and ter Stegen kept Barcelona hanging on.

Having fought valiantly for majority of the game with 10 men, the genius that is Lionel Messi produced a stunning pass to Neymar in stoppage time and much like Mascherano, Sevilla midfielder Banega was also forced to bring down the Brazilian striker with a professional challenge, earning a sending off and restoring parity in terms of number of players.

The sending off seemed to knock the stuffing out of Sevilla while Barcelona got a second wind despite having given it their all defending throughout the 90 minutes.

The game headed into extra time and it was Messi’s turn to shine. The Argentinean superstar was quiet by his usual standards on the night but what makes him so special is his ability to produce magic out of nothing and his sensational pass to Jordi Alba for the opener on the 6th minute of extra time was exactly that.

There seemed to be no danger for Sevilla as Messi held the ball near the centre circle but displaying wonderful vision and technique, the FIFA World Player of Year nonchalantly lifted the ball into the path of the onrushing Alba on the left wing and the Spaniard produced a deft touch to give Barca the lead.

The goal proved to be crushing for the morale of the Sevilla players and Barcelona then pushed on for the second in rampaging fashion.

Sevilla custodian Sergio Rico was not ready to give up as of yet though and he produced no less than three stupendous saves to deny the likes of Pique, Alves and Busquets.

Unfortunately for Unai Emery’s men, the attacking players were not able to complement Rico’s brilliance in front of goal and with the game winding down, a frustrated Carrico Martins got himself sent off following a horror tackle on Messi.

Messi shook off the terrible challenge to aptly seal Barcelona’s 28th Copa Del Rey title with another brilliant assist, this time for Neymar in stoppage time of extra time and the goal sparked wild celebrations from the Catalan faithful.

Both teams put on a brave battle on the night to make the final a memorable one but Messi was at simply another level and his performance served as a further testament to the fact that the little Argentine wizard is simply the best players in the world.