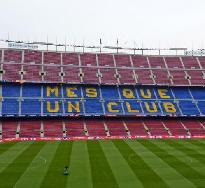 FC Barcelona due Luis Suarez and Neymar aka two thirds of the much lauded ‘MSN’ trio at Barcelona have made it into this week’s UEFA Champions League team of the week.

Following their convincing 3-1 win over Arsenal at the Nou Camp last Wednesday which sent Los Blaugranes into the Champions League last eight, Luis Suarez and Neymar were included in the team of the week following their goals in the tie.

Uruguayan striker Suarez stole the headlines with this stunning bicycle kick whilst his Brazilian team mate Neymar also had a part to play with his opening goal of the night sending his Barca on their way to the quarter finals.

Elsewhere from La Liga, Atletico trio Juanfran, Giminez and Griezmann made it into the best XI after their side progressed to the next round via a tense penalty shoot-out.